Disclaimer: I receive free products to use in my recipes. All thoughts and opinions are my own

I think every state has a dessert known to their state, right? In Maryland, it is the Smith Island Cake.

Among other things, Maryland is known for the Eastern Shore, where fishing and catching crab is not just a weekend event, but a way of life. Near the bottom of the state, on the Chesapeake Bay is a 400-year old island, named Smith Island. There are only 250 residents on the island and it’s only accessible by ferry or boat. There are no cars on the island. 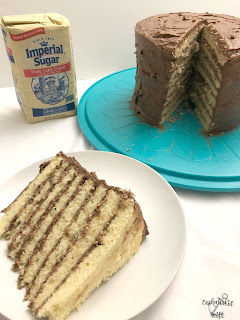 The island is a fishing community and the story goes that in the 1800’s the wives of the fisherman would create this thin layered yellow cake topped with a chocolate fudge frosting and send it with their husbands when they went out for the annual oyster harvest. But it took until 2008 before Maryland declared the cake it’s State Dessert.

No one knows for sure who decided that the cake should have so many layers, but it cannot be considered a Smith Island cake unless there are at least 8 thin layers, but up to 14 of them. It’s an ambitious cake for any blogger to make. 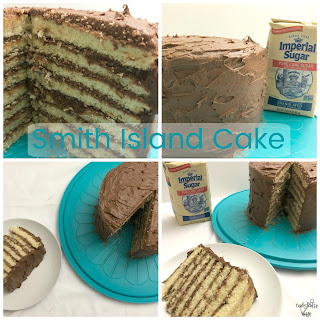 Especially one who isn’t very good at frosting cakes, which is what came to mind at 9:57 pm when I was carefully placing the fourth layer of the cake on top of the third. I’ll admit, this cake isn’t perfect. The layers should be thinner and I should have used a fudge frosting. I also can’t get the perfectly smooth look with icing that some bloggers can, but an 8 layered cake is no easy task and I think I did pretty well.

I have really bad luck with fudge-like frostings so I decided to go against what is standard in the cake and use a buttercream instead. I found out that buttercream was initially used, but then it was changed to a fudge frosting because it would last longer for the fisherman. 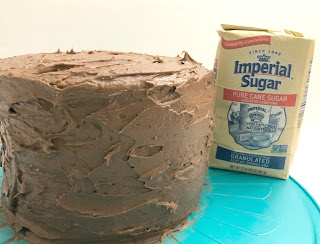 Since it’s not the 1800’s and I’m only taking half of this cake into work for my coworkers, I think the Smith Island residents will forgive me.

I won’t lie, I was cringing and incredibly scared to cut into this cake, but I forced myself to do it and gasped. While assembling the cake I couldn’t tell if it was going to turn out looking like the ones I’ve seen online or had in a restaurant, but it did! 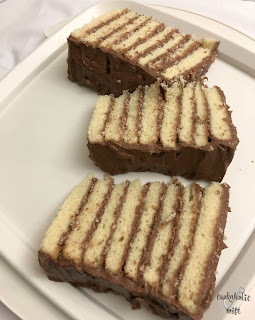 Imperial Sugar is the gold sponsor of #Choctoberfest and they are incredibly generous, sending ALL of the bloggers 88 pounds of sugar. Yes, you read that right. Eighty-eight pounds. Which of course, we turned into a hashtag on social media and I think most of us even ended up apologizing to our UPS delivery person for hauling that from the truck to our front doors. 😀 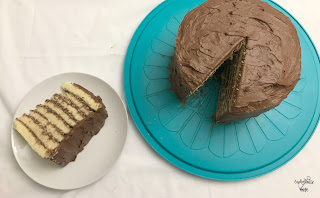 Don’t forget to enter the giveaway! You can find it on Monday’s welcome post, here.